In 2017, Brazilian designer, Silvia Ulson, was accused of stealing a design – down to the pattern – from a Nigerian-American designer. At Miami Swim Week, Ulson displayed her designs to a crowd and many people thought it was reminiscent of a particular African-American label. Speculation circled that the designer stole the pattern from the Byfne 2017 “Sahara” swimwear line – and after seeing side by side pictures, it’s hard to say that she didn’t steal the look.

Take a look for yourself: 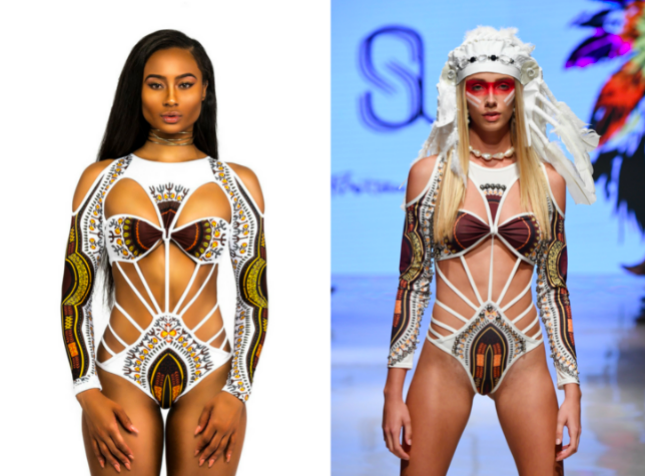 After reaching out for comment on the matter, a rep for Byfne said to Huffington Post, “It came to us as a complete surprise how another designer is allowed to showcase replicas and claim it as her work during Miami Swim Week.” But Ulson was quick to come to her defense saying that she was inspired by a tribe native to her home country of Brazil.

Making a case for herself, Ulson said, “I went to a tribe and spent two days there,” Ulson told FashionWeekOnline. “That’s what we used for the headdresses…So upon returning from there, I made the black-and-white bikinis that were also shown and thought it would be interesting to have some bikinis with prints mixing the indigenous paintings that they paint on their body. For the Brazilian Indians, each painting has a meaning.”

#FashionDiscussion: The popular swimwear brand @bfyne (pictured left), known for their unique designs has accused fashion designer @SilviaUlson (right) of plagiarizing their 2017 Sahara collection inspired by the brand’s Nigerian culture. There is certainly a striking resemblance between #SilviaUlson’s collection and #Bfyne’s. What do you think? #instafashion #style #instastyle #fashionbombdaily #celebritystyle #fashion

What do you guys think about the similarities between the designers’ looks? Do we think Ulson has some decent evidence to back herself up?

Moises is a full-time graduate student at the Craig Newmark Graduate School of Journalism at CUNY reporting mainly on food and restaurants but maintains overall emphasis on arts and culture.

Five Zambian Designers That Are Catching the World's Eyes